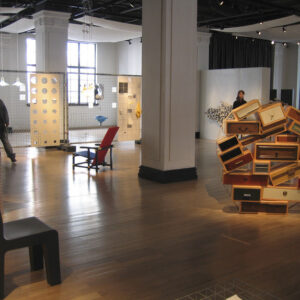 Droog’s travelling exhibiton ‘A Human Touch’ started its tour 3 March 2006 in Shanghai and followed its way to Shenzhen, Sydney, Melbourne, Jakarta and Lower Hutt (New Zealand). Its final destination brought us back to China, to the Yong He Art Museum in Beijing. Every single design featured in A Human Touch had a story to tell, often humorous or playful. These stories are understood all over the world.
The products that Droog chose for the exhibition A Human Touch were all ready-to-use products which could be touched by the visitors. A Human Touch has been supported by the Netherlands Culture Fund. The exhibition was accompanied by the A Human Touch catalogue, for which the product photography was realised by the Dutch photographer and artist Joke Robaard.