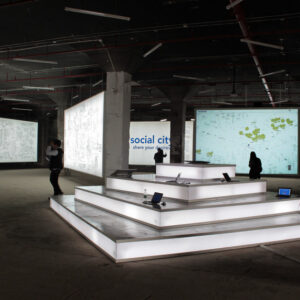 The Bi-City Biennale of Urbanism/Architecture (UABB) in Shenzhen invited Renny Ramakers to be the co-curator of Re-Living the City – the 6th edition. She curated the Social City exhibition, which consisted of an online platform and large-scale installation filling approximately 1000m2 of the former Dacheng Flour Factory in Shekou, Shenzhen – a declining factory complex built in 1980s. Social City advocates a new way of city-making based on the diversity of dreams and desires of city dwellers. Since urban life is so diverse and changing, it beckons a new way of city creation that is shaped by its citizens – one that embraces their desires and diversity.

Social City is dedicated to exploring how the diversity of citizens’ dreams and desires can shape the city of the 21st century. This is in response to a number of frictions: the gap between the city that people want to live in and the city that people end up living in. There is a gap between the way professionals envision the city and how people in fact organize their lives. This means that citizens are generally reduced to an abstraction in an urban planning that leaves little room for diversity of dreams and desires of citizens.

The exhibition in Shenzhen presented various ways of how to learn about the dreams and desires of citizens. In two interactive installations, called ‘Babel’ by architect and computer programmer Mark van der Net (OSCity), the social media (Weibo and Twitter) in Shenzhen and Hong Kong were directly being tapped. Because digital technology and social networks have drastically changed city life, which makes it hard to conduct research on an increased fragmented society with standard statistical methods. But through tapping the social media one can better explore how people are simultaneously connected with each other through the virtual and the real, what they talk about and where they are while using social media.

In Social City citizens are not being perceived as abstractions, instead Social City mainly focuses on the diversity of citizens’ lively dreams and desires. Therefore artists Jan Rothuizen has taken the digital data mapping as starting point. From this data he selected and contacted people to meet in real life. Based on his encounters with a retired investor, a travel office employee, an Uber taxi driver, and a factory worker, he made drawings of their individual behaviours and desires.

Social City also captured and continues to capture the dreams and desires of citizens all over the world via the quiz on www.socialcities.org. People are invited to answer questions about their ideal city life. This generates a unique avatar that will have its virtual home in Social City, which is built according to the given answers in the quiz. Social City invited experts in the field of architecture, urban planning, sociology and economy to reflect on the content generated by citizens and to start a dialogue with them. Eventually also visualisations of the results were being made.

The data from the platform will have to result in design solutions: the building stones for the future city. The challenge is to combine all different desires in one city model. Architect office TD did the first exercise, which is based on one of the questions in the quiz: “how would your house in Social City look like?” So far it turned out that most people want to live in a tree hut, a building block or a detached house. But there are also quite a few people who would like to live in a house boat or a mobile home and there are even people who do not want a house at all. TD’s ‘Treehousewaterboatappartmenthammocktower’ is a free interpretation of this diversity of desires, illustrated in a condensed example for one building block. It is no science fiction, but actually tested on technical feasibility.

Social City was a first full-scale exercise of the Design+Desires program, which Renny Ramakers has initiated in 2014. Design+Desires examines how to link the dreams, desires and needs of citizens to their virtual and real daily experiences. With Design+Desires she created a research-and-do-program that combines the output of social media, active participatory citizen research, technology, and innovative design solutions.