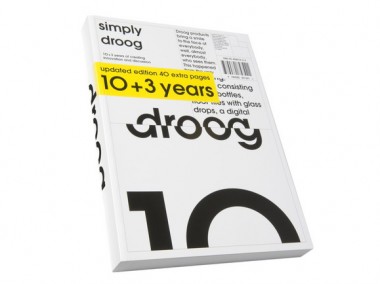 Since the publication of this book in 2006, here’s an update of what we’ve been up to since then.

2007
Gijs Bakker and Renny Ramakers receive the Benno Premsela Award. Master pieces of the IM Master course at Design Academy Eindhoven are presented at Droog. In collaboration with University of Delft, Droog presents Dry Tech III with new works by Chris Kabel, NEXT architects, amongst others. Amsterdam housing association Ymere commissions Droog to develop a Townhouse, and Droog invites Tokyo-based Atelier Bow-Wow to collaborate. Droog commissions Atelier Bow-Wow to design a new hotel around the corner from its store in Amsterdam.

2008
Droog presents A touch of green at the Furniture Fair in Milan, together with a 48 hour pop up store. The Climate competition is launched, and ‘Droog Aalto’ by Jan Ctvrtnik is selected by website visitors as the winner. This years’ Master pieces of the IM Master course at Design Academy Eindhoven are presented at Droog. In collaboration with communication agency KesselsKramer, Droog presents S1NGLETOWN at the Architectural Biennale in Venice. The Dutch Ministry of Foreign Affairs commissions Droog to develop a new business gift for the most important contacts of Dutch embassies worldwide. Droog launches this project as a competition selecting Space to take place, a 100 meter bench by Claudia Linders. Urban Play takes place, a seriess of events and exhibitions within the streets of Amsterdam.

2009
The first project of the Droog Lab, Droog al Arab is launched with leading designers Jurgen Bey and Saskia van Drimmelen. Droog New York opens in SoHo, with an interior by Studio Makkink & Bey. Co-founder Gijs Bakker leaves Droog to concentrate on his independent work. Ketel One asks Droog to design its three dimensional event spaces and its basic kit of bartender tools and glassware. Droog presents a series of new work in Milan with designers such as FormaFantasma, Nacho Carbonell, Studio Makkink & Bey and Chris Kabel, together with a pop up store. Droog presents Townhouse by Atelier Bow-Wow and Paper bone chair by Joris Laarman at Design Miami, amongst other studio works. New fashion items are introduced to Droog’s store, including Gluejeans by G+N. The second Lab project, Luxury of the North is launched with leading designers Winy Maas and Cynthia Hathaway. Chris Kabel wins the DOEN prize for the Seam chair developed for Dry Tech III. Droog wins the Time out prize. Renny Ramakers curates a festival of Dutch design, fashion and architecture to commemorate 400 years of a Dutch-American friendship at Governors Island, New York, with over 25,000 visitors over the course of two weekends.

2010
Fastcompany lists the year Droog opened on Staalstraat in Amsterdam as one of the decade’s 14 biggest design moments. Droog asks 14 designers to revive over 5000 leftovers, presenting a new collection of 19 products in Milan as ‘saved by droog.’ The exhibition is coupled with a manifesto and a ‘new owner’ photo campaign. The exhibition will travel to Droog New York in September, bringing in new designers and inventory. Downloadable design is launched—the development of an innovative business model and platform for downloadable design and local CNC fabrication. Ketel One commissions Droog to produce an animation that tells the story of its bottle. The Thomas Eyck collection becomes available in New York exclusively at Droog New York, featuring objects by Aldo Bakker, Christien Meindertsma, Scholten & Baijings and Studio Job. The outcome of Droog al Arab will be presented in Dubai. Two more Lab projects are launched—Serving NY led by Diller Scofidio + Renfro and one on the theme of consumption in Russia to be part of Strelka’s summer program.