In Suburbia: What a Concept published by the Opinionator of New York Times, Allison Arieff is certainly right when she says: “Addressing suburban ills requires massive change to systems, to finance, to transportation and infrastructure, and perhaps most challenging, to a culture deeply wedded to suburbia as emblematic of the American Dream.”

Most ills in this world (and we know there isn’t a shortage of them) require massive change on systematic and ideological levels. Indeed, it is a capacity—and many say, a responsibility—of design to address the many pressing problems facing the world today.

But is this the only role for design? Is design solely a form of crisis management and problem solving? Or can design also offer a different perspective on a problem, without having the aim of solving the problem entirely?

Service exchange in the suburbs

Our inspiration came from New York City’s service economy. In collaboration with Diller Scofidio + Renfro, we realized this system does not only create jobs and encourage social encounters, but also plays a psychological role for the service providers, in stimulating them discover something they are good at. We saw that the habit of outsourcing all kinds of life tasks by people in New York encourages others to invent their own professions.

We also noticed that many service providers we met created their profession with little investment and new infrastructure. Dany the trainer visited the homes of his clients to do training on their floor, Joshua the psychic held his practice in his home and Brian the dog walker only needed leashes and trust. It turns out that starting your own profession is possible with little or no capital. 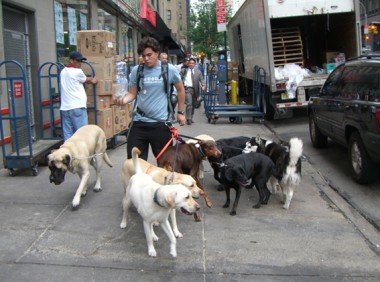 We thought these dynamics had broader potential. Entering the suburbs, we did not intend to resolve the issues it faces, but rather to explore what value personal service exchanges might offer to suburbia.

We see Open House as a movement in which homeowners consider home business as a viable way to create a new role for themselves, which also increases interaction with neighbors, and possibly supplements one’s primary income. The one day event offered ideas and illustrated potential outcomes—some more realistic and some more speculative (or even fictional) than others. As a tool to help people discover their inner service providers, the event served to provoke visitors and participants to think for themselves about what might be useful for them as a business. We didn’t expect that the homeowners participating in the event would open up a business overnight. 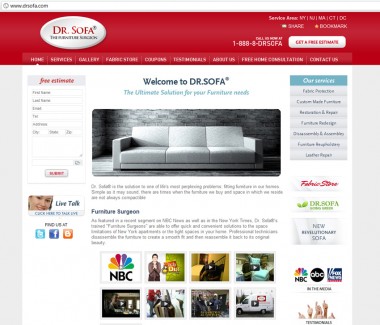 Many services we encountered during our research in Manhattan appeared to be absurd at first glance (think of hiring someone to follow your spouse because you are suspicious of misbehavior, hiring someone to cut up your sofa so you can get it up your stairs, or signing up for a service to do yoga with your dog). The service economy has shown that what might start off as a strange business proposition, often turns out to address people’s actual needs and transforms into a serious business. 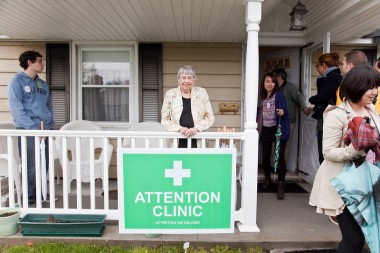 That’s what seemed to have happened at Open House #6: Attention Clinic by Claudia Linders. Though its inspiration, the Monty Python Argument Clinic of 1978, is more comical in its intent, the one-day Attention Clinic at 39 Old Oak Lane turned out to be surprisingly real for homeowner Polly Dwyer: “When you are 82 years old, people often ignore you because they think you don’t know anything. I was thrilled to find out people wanted advice from me. It turned out I had a lot of life experience that I could call upon and it wasn’t so difficult for me to do so. I wasn’t expecting this at all.” Though Polly does not plan to pursue the Attention Clinic (she has her plate full curating Levittown Museum and taking care of her husband), her participation in the one day event revealed a hidden capacity she hadn’t considered before. 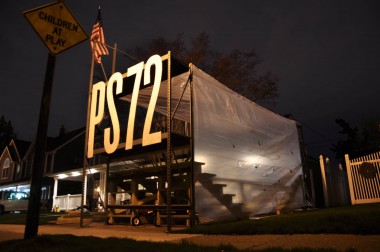 A less unusual but equally earnest proposal was Open House #5: PS72 Porch-Side Lessons by Austin + Mergold with Spencer Lapp. PS72 was a teaching facility hosted at 72 Knoll Lane by Phyllis Dalton, a teacher and school principal who has been out of a teaching position for a few years. Designer Jason Austin explains: “Phyllis asked us to give her back her classroom. It was obvious to us that she had a lot of talent, but she seemed not to be able to market herself and her talent. The architecture became a platform for her service. We wanted it to support and display her talents and presence within the neighborhood.” Adopting a suburban vernacular, the materials for PS72 came primarily from Home Depot, including off-the-shelf plywood and lumber, lawn-mower wheels, plastic tarps and the American flag—an off-the-shelf garden accessory. The designers also adopted an institutionalized aesthetic to make the experience reminiscent of elementary school. “All aspects of the project were about developing infrastructure that was familiar and accessible to the suburban community.”

We also spoke with Phyllis after the event: “Once a teacher always a teacher,” she said. “I enjoyed passing on something that was not academic to people. I was able to use the teaching skills I had from my career for something that I was more passionate about.” Teaching the visitors two personal hobbies (collecting Hummels and making photo books), the 15-minute school session offered visitors a classroom experience, complete with a miniaturized version of a gymnasium, a library, a graduation ceremony and class photos. 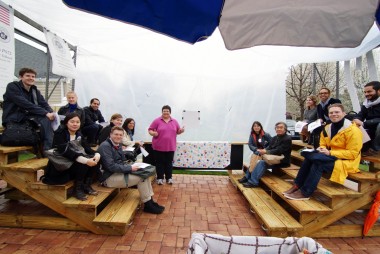 A few keen early-adopting homeowners with new business concepts are not enough to start the Open House movement. There are bigger issues to tackle, like outdated suburban regulations, and other issues rightfully raised by Arieff, including finance, transportation and infrastructure. The ninth house on the Open House tour addressed some of the broader implications of the Open House proposition. 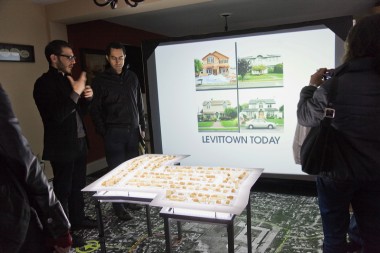 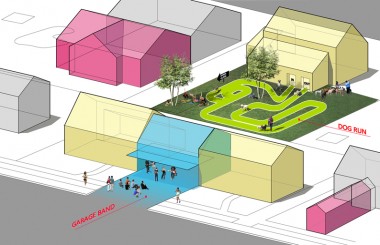 In what was deemed the neighborhood showroom, Future Open Houses by EFGH (Hayley Eber & Frank Gesualdi) with Irina Chernyakova challenged existing rules of the suburbs and visualized the potential outcome of a bottom-up service economy on six blocks of Levittown. Regulatory modifications were proposed, including the possibility to convert private property (for example driveways) into public right-of-way (in for example, an drive-through service for sales or rentals), joint-use easements for two or more property owners to share a common feature (such as a mini storage facility or performance space built between two homes) or the modification of a occupancy group classification for the setting up of a public amenity (like a public theater, for instance). This house also presented sample floor plans of houses modified to host public services such as an art gallery, a love hotel, or a dog-sitting business. 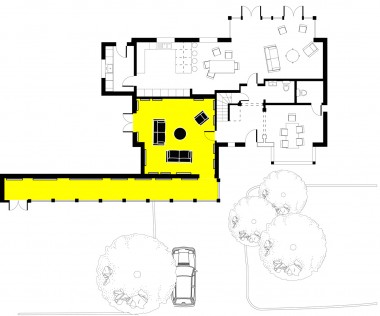 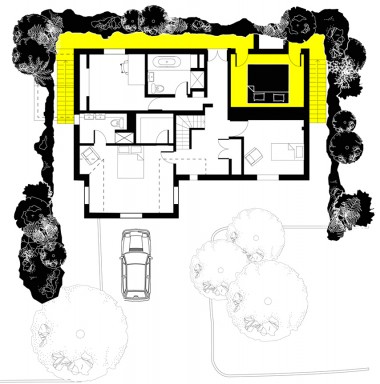 We see the event as a model for a future suburbia, which is not the model to solve all possible problems facing the suburbs. It is just a model to revive—to get more life—into suburbia.

The one day event was the first phase of the project. We are currently working on a publication which will deepen our insights, including those raised from these discussions.

In our work, we approach many serious topics, such as the rise in single living, sustainability, the increasing pace of life and the economic crisis in a playful way. We want to continue to generate debate by presenting models and possible scenarios with a light-hearted spirit. We are glad the debate has started.