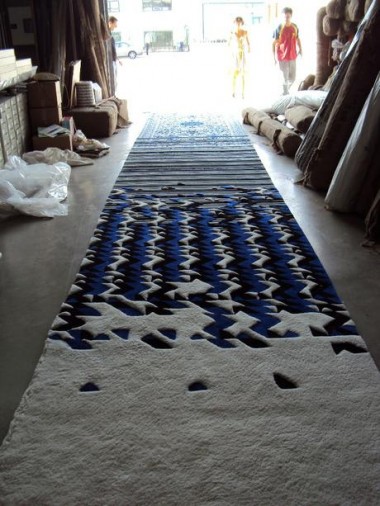 This Thursday, September 22nd we will present the outcome of the Droog Lab project that investigated the habits of Russian consumers at Droog in Amsterdam. A presentation will follow in Moscow in 2012 in partnership with Strelka Institute of Media, Architecture and Design. As in all our Droog Lab projects, the outcome will be accompanied with a debate.

Our Lab projects start with my intuitive observations. In New York I was struck by the service economy, and in Russia, I was struck with consumer behaviour.

We all know that that Russia has a rich tradition in literature. In 1987, when I took a train to the countryside outside of Moscow, farmers were sitting around me with buckets of potatoes that they were taking to sell on the city markets. They were totally absorbed by Dostoyevsky and Tolstoy. In supermarkets and kiosks, classics and popular fiction books sit next to each other, as convenient items to be consumed on the go. I wondered how this addiction to reading could be reconciled with their lavish consumption—their love of diamonds and gold. Is there something to be learned from this paradoxical culture?

This was the brief to the team led by Daniel van der Velden (Metahaven). During their research in Moscow they discovered that these seemingly conflicting ways of consuming can be reduced to passion—to their love for fiction and fantasy as forms of escapism. This need for escapism emerged from a context of institutional mistrust. Since money is said to be dust, something not worth saving, it is better to spend it on more reliable things. We then realized spending on fiction and durable goods should be seen as an investment. A classic example is golden teeth, and another striking example we heard about was about a guy who bought two Porsches—one to drive in, the other one for spare parts.

The thought that acquiring durable goods can be a survival strategy made me think about our notion of the aesthetics of sustainability. If goods are durable why do they have to look so austere? We seem to think that there is a connection between “saving the environment” and an aesthetic that is bare and grey. We seem to think that sustainability is austerity, it is moderation, it is consuming less. If products are designed as an investment for one’s lifetime, there is no need to our pre-conceived notions of sustainable aesthetics. One of the outcomes of our project is a carpet with a pattern that changes as you get older and your taste and needs change. You buy it once in your lifetime. Another design shows screws that are made of 24-carat gold. Hidden in your furniture, they provide security if times get worse.

On September 22nd these principles will be presented with an imaginary brand, Fantastical Investments. The brand connects notions of survival and escapism with fiction and fantasy. Fiction is survival, story is shelter and celebration is memory.

In conversation with our team, Olga Kuzina, a Russian sociologist and economist pointed out that “in the world of rising uncertainty and institutional instability Russia may be considered as a looking glass that for the last 20 years has been offering the Western countries the reflection of the coming future.” In Russia the post-institutional era has begun, whereas we are just starting to mistrust the institutions. I would add that Russia also leads the way to a different vision on the aesthetics of sustainability, the creation of products that last a lifetime, products that will not be thrown away after a few years, products that can be seen as an investment in our insecure times.