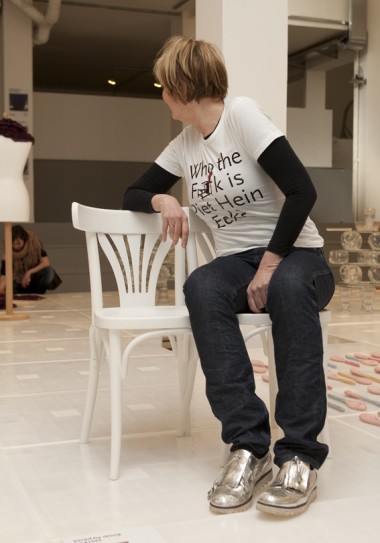 What was the motivation behind the exhibition?
“The emphasis in Milan has always been to present new products. Much of the innovation comes from new materials and techniques and the outcome is more products.  The drive for the new is endless—it is demanded by our profession and the market for survival.
At this exhibition we are responding to this demand by reviving leftovers—existing products that still have their basic functionality intact, but somehow have lost their place and have become undesirable and unused. We saw this as a perfect opportunity for a revival.”
Why are you interested in using leftovers?
Three reasons:
a) to save them from the landfill (relating to the environmental crisis)
b) as an innovative business model (relating to the financial crisis)
c) to challenge designers to shift from ‘how to design something it’ to ‘what to do with it’ and to see what new qualities this can bring.
Do you see new qualities in the designs?
“If we gave them a different brief, for example, to design new cutlery, we would have never gotten the response we received. The designer would have concentrated on how to design it, rather than on what to do with it. In Ed Annink’s case, the knife is still a knife, but it is also a mirror for the eyes (he put a little magnet for hanging it somewhere). There is a double function that I’ve never seen with cutlery.”
And in the example of the ‘Read before you eat table,’ the design aspect is not in the table per se, but on the message on the table, urging you to take an action before eating.”
Were the outcomes what you expected?
“Not at all! I never could have expected the ‘3 star bomb!’ by Atelier Ted Noten—a whimsical narrative from 500 very ordinary matchboxes. Or the design by Studio Makkink & Bey—they turned handkerchiefs into a new kind of very slow world news carrier, one that distributes articles personally selected by Jurgen Bey on a medium that the reader can then embellish with embroidery and that can be kept in the pocket.
In the Netherlands we say ‘newspaper of today is for packing the fish tomorrow’. Jurgen made a newspaper in a completely different way. It’s particularly timely with the arrival of the iPad. The responses are diverse, and that makes the project stronger.”
What’s the difference between Droog in the nineties, and what we see at this exhibition today?
“Re-using the old is a familiar concept for us, but never have we done it at this scale. Our interest in this project was to see if using unwanted remains could be turned into a coherent business model—as a valid approach to developing a ‘new’ collection (which also by definition exists in limited editions). Timeliness is also critical—the financial crisis means developing new products in the old way is just not good enough. We need innovation on a structural level.”
Will you continue with this approach?
We would like this project to travel as a pop-up store, also asking local designers to contribute new designs, and also using leftovers that are readily available in that location.
I also see this project as a laboratory for unlimited editions, which means the starting material does not necessarily have to come from a bankruptcy, but rather be easily made. The crux is to use something existing or something easily made as the starting point for re-interpretation.