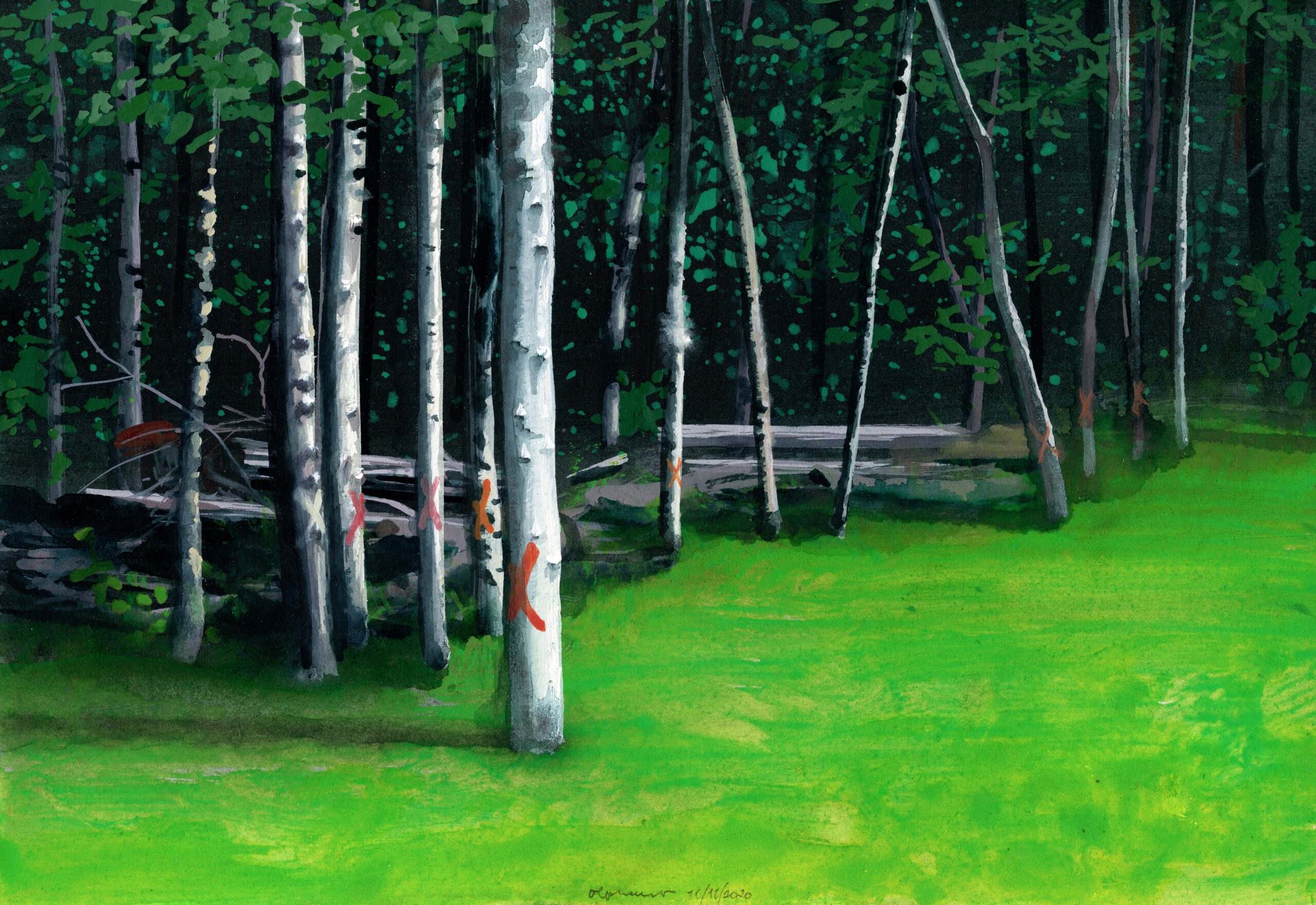 [email protected] presents Reality Check, a solo exhibition by visual artist Olphaert den Otter (Poortugaal, 1955). The exhibition features 28 paintings in egg tempera on paper and canvas/panel, from the series World Stress Painting, Home Made, and Postcode. Most of these have never been shown before. They form a bridge between classical landscape painting and contemporary subject matter. This exhibition shows how beauty and engagement can reinforce each other.

download here the text of the exhibition – in Dutch

Olphaert den Otter’s paintings are based on reality: a report or a photo in the newspaper, a spot in the woods, the meagre possessions of an unhoused person. Yet the works are not realistic. At will, Den Otter omits or adds details from the image. For instance, he consistently leaves out all the people: “There is no story. There is image.”

Den Otter paints landscapes, in which people left their traces, in which disastrous events took place, in which the natural environment underwent changes through the ages. His work expresses a deep commitment to the earth and the world. Since 2009, he has been making World Stress Paintings, an infinite series of works in which he visualises places that have turned into catastrophes due to human intervention. His Postcode series captures how homeless people make shelter through creative use of waste.

‘The earth’ is our planet, ‘the world’ is what it became because of what we made of it. There is a tension between earth and world, between humans and their environment. I see that tension and base my work on it.

Through his sense of composition, colour, and staging, he gives a soul to a newspaper photo or a seemingly insignificant place. Den Otter paints beauty, but it is a beauty without wellbeing. Because of their emphatic aesthetics, the paintings seem one-dimensional at first glance, but on closer inspection they prove to be very layered. It is precisely this aesthetic that heightens our perception. A wry beauty manifests itself in his work, which does not smooth away life but exposes it in all its painfulness.

Every Thursday, Den Otter posts an image of one of his paintings on Facebook with an accompanying text. These texts form an integral part of the exhibition. They are almost always written in retrospect, sometimes years after a painting has been completed. Text and image are both snapshots, from parallel worlds intersecting along the paths of Den Otter’s lasting preoccupations throughout the years. This makes them time and place specific as well as universal.

A special publication written by art critic Anna Tilroe will accompany Reality Check. She will also open the exhibition in the presence of the artist on Wednesday 9 November. The Reality Check exhibition is curated by Renny Ramakers.

Olphaert den Otter (born 1955, Poortugaal) studied at the Willem de Kooning Academy in Rotterdam. Den Otter’s career spans over 40 years as a visual artist, a painter, animator, and, in the past, teacher at various academies. His work is included in various museum collections including the Museum Boijmans Van Beuningen, Centraal Museum Utrecht, Stedelijk Museum Amsterdam and Kunstmuseum Den Haag, Museum Belvédère Heerenveen. Den Otter participated in group exhibitions in the Netherlands, Germany, Switzerland, the UK, Belgium, and Australia. Besides his practice as a visual artist, he is a countertenor in the Rhetorical Quartet and lectures on cultural-philosophical themes. Olphaert den Otter lives and works in Rotterdam.