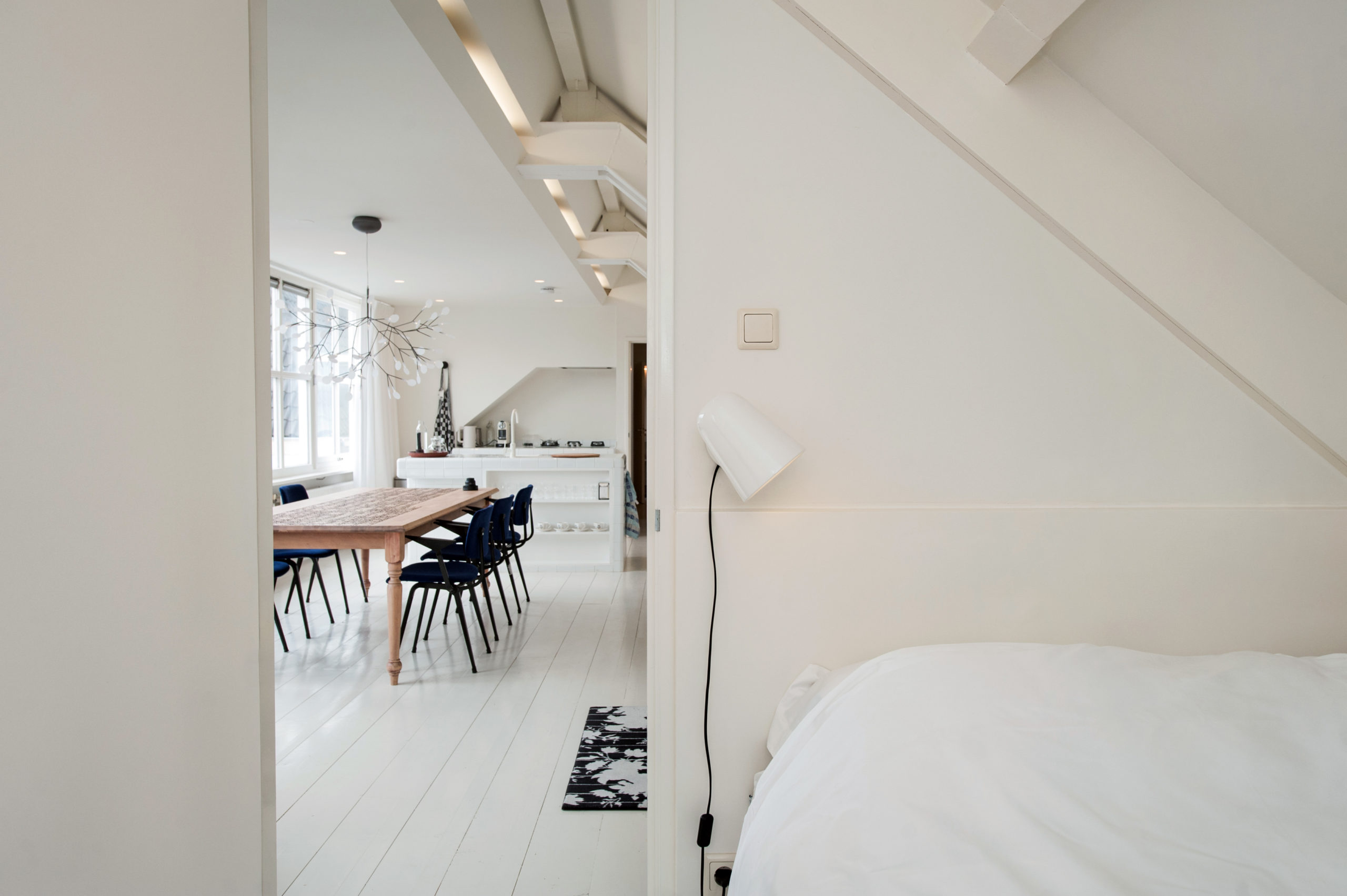 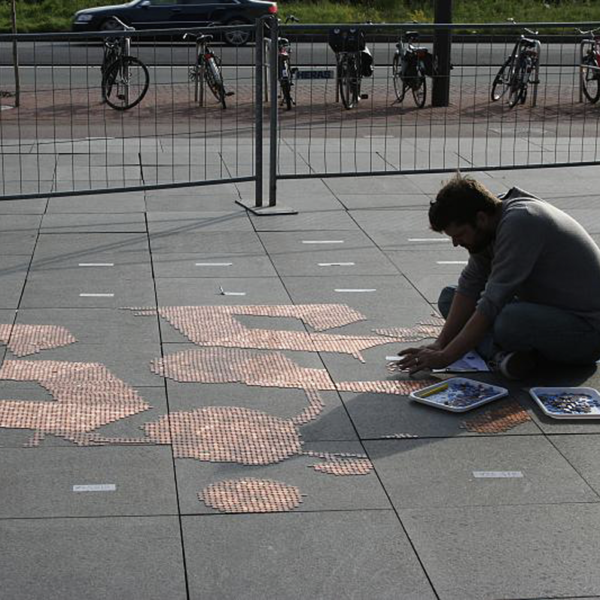 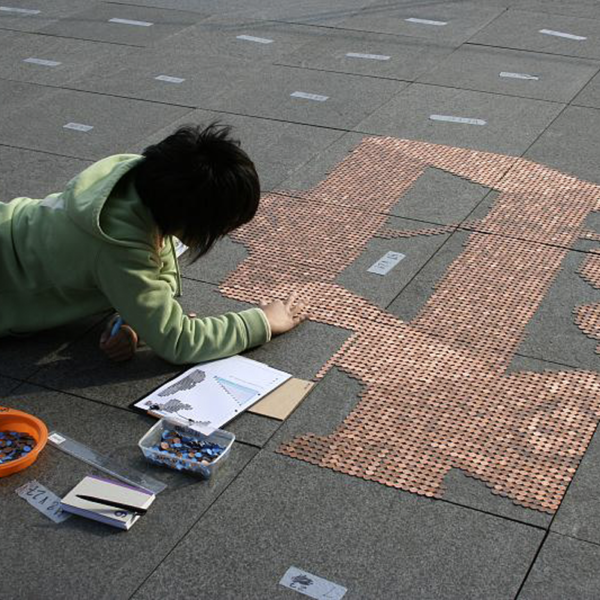 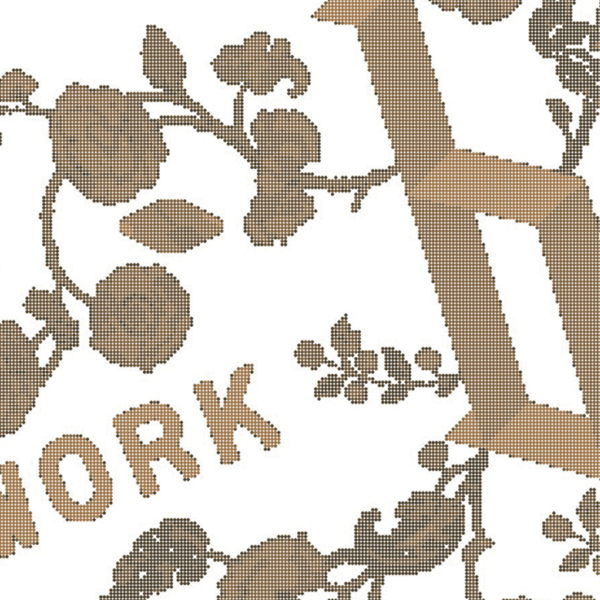 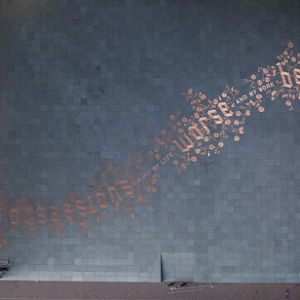 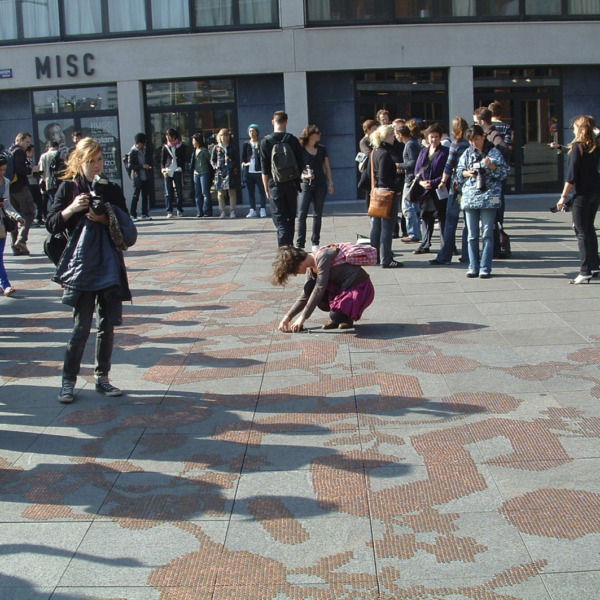 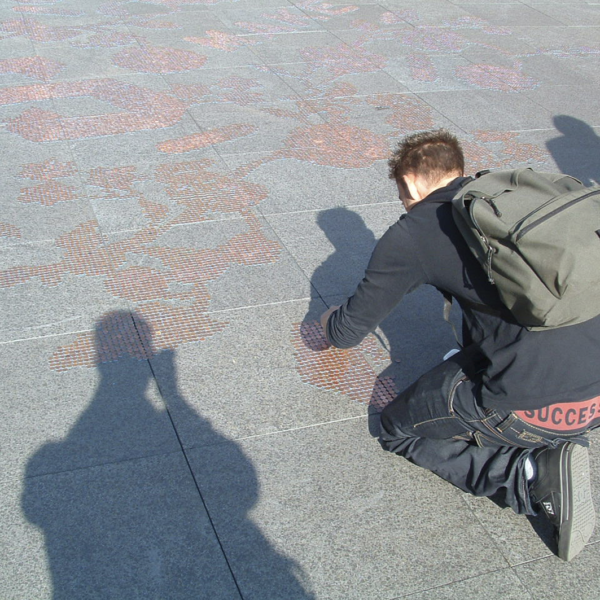 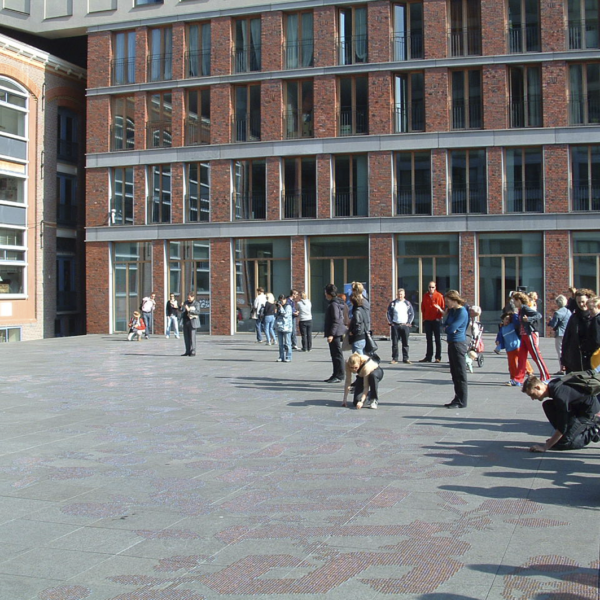 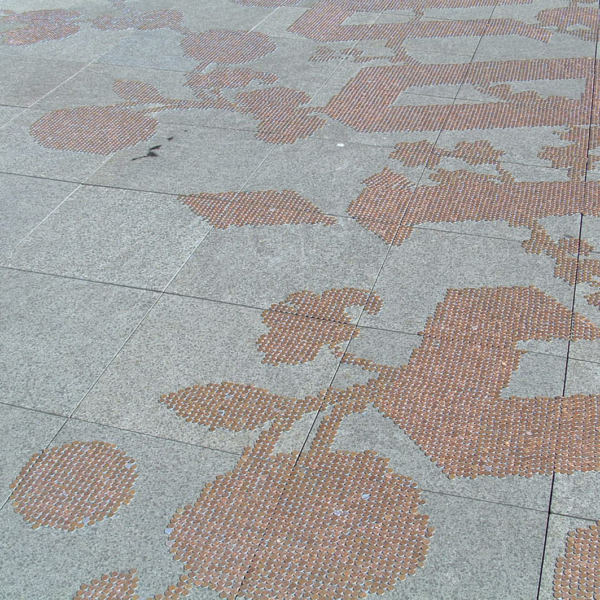 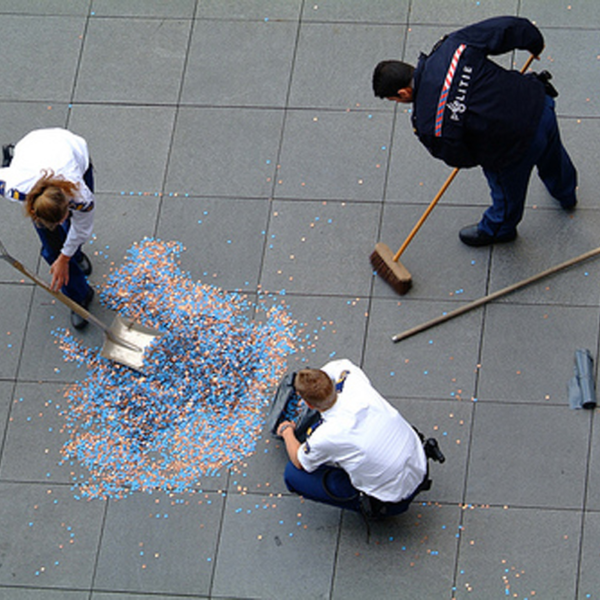 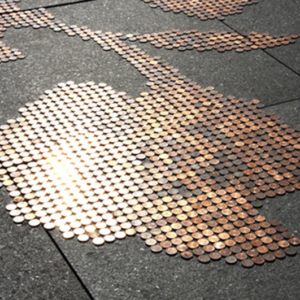 The day after the official opening of Droog Event 2: Urban Play, Stefan Sagmeister’s graphic piece of art turned out to be completely gone!

The work, called ‘Obsessions make my life worse and my work better’, was built from 300.000 cents and laid out by a hundred and fifty volunteers during eight days at the Waagdragerhof, Amsterdam. On Sunday night, local residents noticed two persons sweeping up the coins and so they warned the police. The police came on site and put all the coins in a big bag, just to be on the safe side, and gone was the work of art! It was all in the game that this project wouldn’t stay, but that the police…

The Dutch newspapers picked up the news pretty well, with headliners such as ‘Police accidentally destroys piece of art’ (Algemeen Dagblad) ‘Police sweeps away coins art’ (Parool). The police stated the following:

’21-09-2008 / art project cleared / Groenhoedenveem
Sunday morning the 21st of September, the police unintenionally cleared and secured a piece of art exisiting of 1 euro cents, after a report of copper theft. Police officers came across a large amount of coins spread all over the park. To them it was unclear who owned the money and why the coins were spread over the park. In collaboration with the calamity service of the municipality they have collected the approximately 260,000 pennies and stored them at a police office. Meanwhile it turned out that the police knew of this art project, but that the information had not been passed on to the police officers on duty. Meanwhile the police has returned the coins.’ (Translated from original police statement, 21-09-2008, bureau of communication of the Amsterdam police.)Well, well…

Based in New York, United States Stefan Sagmeister is the founder of Sagmeister Inc. a purposely small graphic design company based in New York. He was trained in Vienna as a graphic designer and continued his studies at Pratt Institute in New York. After some adventures around the globe he established his own studio there and started designing mainly for the music industry. On his website, Sagmeister states: ‘We design all things printed, from posters, brochures, books and annual reports to identity systems, perfume packaging and CD covers.’

In the year 2001 he took a year off from his studio – a year without clients – and in this leap year went back to his old diaries and started to draw out some ‘things that I have learned in my life, so far’. When he returned back to work Sagmeister embarked on an ongoing project based on sentences from these diaries. For the typography he used a great variety of materials and sites, writing three-dimensionally on objects and surfaces. Most of the executed sentences can therefore be termed: staged typography.

‘Obsessions make my Life Worse and my Work Better’ is one of these sentences, an elaborate design that consists of 300.000 eurocent coins and will be laid out on a 20 x 42 meter square in Amsterdam. It is potentially a self-destructive piece. The coins represent a certain value, but the design is also of such beauty that it challenges the passer-by. Will they leave it intact because of it’s beauty? Will they start to make a design with the cents themselves? Of will greed take over?